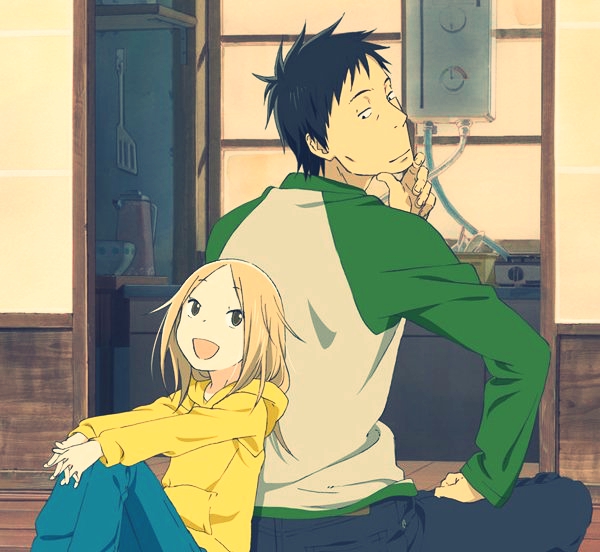 Japan has a declining birth rates in the past 10 years, and Otaku(s) is one of the reason. Most of their people refuse to have a child since it will be make their life more complicated. This series was aimed at the ones who always thinks like that, and hoping they will change their mind after watching this series. Usagi Drop showed the world how beautiful your life with a child, explained perfectly how a child can colors your house and living room.

Usagi Drop’s story begins with Kawachi Daikichi, a 30 year old salesman who has returned home to attend a family funeral. During his stay he finds out that his deceased grandfather had an illegitimate daughter called Kaga Rin. Nobody knows who the girl’s mother is, so the family begin arguing over who will raise her until Daikichi, who has become increasingly annoyed and disgusted by their behaviour, asks Rin if she wants to live with him (Archaeon, 2011).

It doesn’t have supernatural things, it doesn’t have action fighting, it doesn’t have high quality comedies, it doesn’t have over dramatic story, and it also doesn’t have romantic story, yet I still find it brilliant. How? The writer just keep the story simple and interesting consistently. Usagi Drop is a proof that genre is a very subjective view to assess a story quality. The most important thing is to make the story interesting consistenly, always keep it simple and interesting. I believe there’s no bad written script on the story, the writer keeps the conversation and background story as simple as possible, and it made this story is so easy to understand and fun to follow. The relationship between Daikichi and Rin is a relationship that everyone will adore whoever you’re.

Usagi Drop is a rare adult-story anime. Usually, an anime that aimed to the more mature audience is mostly about sex, murder, torture, psychological freak, and other negative vibes. I honestly think Japan should’ve make and adapts this kind of anime more often, I know it probably doesn’t sell very well, but it’s important to teach people more about humanity.

Usagi Drop may be aimed at more mature audience, but I would recommend this to everyone, no matter how old you are. It doesn’t only showed us about how beautiful a family life is, but it also teach us about how to have a better life, and know what to prioritize.

The main purpose I make this blog is to share all of my hobby-thing and to practice my english-writing.

So, sorry for bad english

All of pictures in this site isn’t mine, I just take it from google.